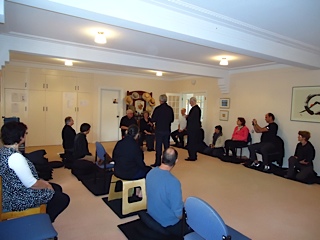 A committee of elected members carry out various responsibilities to ensure a harmonious and efficient organisation manages Sun Mountain Zen Inc. They are guided by the teachers of Sun Mountain Zen.

Sun Mountain Zen is affiliated with the Sanbo – Zen lineage.  This is a relatively young Zen school in Japan, which has drawn freely on both Soto and Rinzai traditions. Members of Sun Mountain Zen can view the Sanbo-Zen Website and learn more about the origin and history of our lineage.  www.sanbo-zen.org 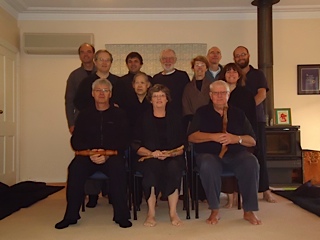 What unites us at Sun Mountain Zen is our commitment to realising and personalising our “true self” in our daily life through the practice of zazen and koan study with our teachers. We do this practice within a supportive community of ‘sitters’ – the Sangha.

Members are also asked if able, to participate in the running of the Sangha and Zendo.  This is done by assisting in various responsibilities such as setting up and cleaning up the Zendo before and after the sittings or coordinating Sangha events.

Later on, as participants become well experienced in the practice, they may be asked by the teachers to take on other responsibilities such as Jikido (the time keeper), Ino (the chant conductor), Jisha (teachers assistant during retreats and coordinator of the dokusan line). The position of Tanto (Zendo leader) is used at the longer Intensives and Sesshin and is appointed by the teachers for each event.